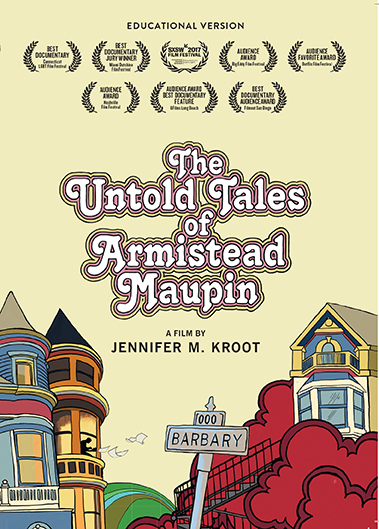 The Untold Tales of Armistead Maupin

THE UNTOLD TALES OF ARMISTEAD MAUPIN examines the life and work of one of the world’s most beloved storytellers, following his evolution from a conservative son of the Old South into a gay rights pioneer whose novels have inspired millions to claim their own truth. Jennifer Kroot’s documentary about the creator of TALES OF THE CITY moves nimbly between playful and poignant and laugh-out-loud funny. With help from his friends (including Neil Gaiman, Laura Linney, Olympia Dukakis, Sir Ian McKellen and Amy Tan) Maupin offers a disarmingly frank look at the journey that took him from the jungles of Vietnam to the bathhouses of 70’s San Francisco to the front line of the American culture war.

“In the 1970s, the San Francisco Chronicle ran a column called “Tales of the City,” a fictionalized account of a young woman arriving in the city and drawn into the counterculture scene. The author was Armistead Maupin, raised in the conservative South and coming to terms with his sexuality. Using excerpts from the columns and clips from the PBS television series of the same name, this documentary tracks Maupin’s evolution from his younger years to his role as a major player in the literary and gay-rights scenes. Extensive interview footage with Maupin (both current and archival) as well as commentary from Laurie Linney, who starred in the PBS dramas, and recollections and thoughtful comments from Sir Ian McKellen, Neil Gaiman, Amy Tan, and others add depth to the coverage. This entertaining program is a good fit in literary collections in public libraries and colleges.” Booklist Online

“Untold Tales is, in fact, a frustratingly difficult film to summarize, because rather than following a definite plot, it is like a day-long visit with a new friend, learning about his life and the people therein. Happily, it is a consistently interesting one, and one that demonstrates the humanity underlying those aforementioned social issues.  It is highly recommended for academic and public libraries.”