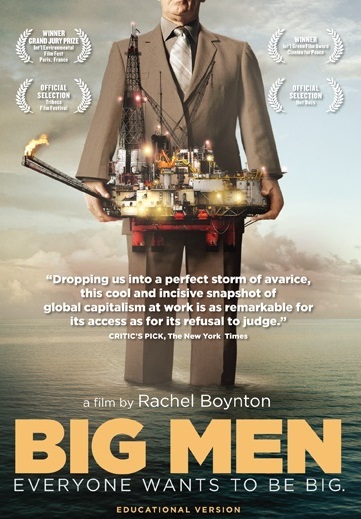 “Big Men” is a real-life Treasure of the Sierra Madre, an epic tale about ambitious people who uncover a massive and exquisitely rare pot of gold in one of the poorest places on earth.

In 2007 US-based Kosmos Energy discovers the first oil in the history of the West African republic of Ghana. What follows over the next five years is a twisting tale of greed and deception, which director Rachel Boynton films with razor-sharp journalistic skill. While in Ghana she makes side trips to nearby Nigeria, whose own oil reserves have been responsible for a vicious cycle of exploitation with little appreciable benefit to the country itself.

“Big Men” travels from company meetings about oil deals worth billions to gatherings of heavily armed militants preparing to strike. And along the way it poses vital questions about what fundamentally motivates us: Is unbridled greed an intrinsic part of human nature? And can what unites us ever be greater than what divides us?

A remarkable verité portrait of the deeper implications of global capitalism and the quest for oil, acclaim and cash that affects us all.

“***1/2. Offering a powerful examination of the more corrosive effects of big capitalism on the global stage, this excellent documentary is highly recommended. Read the full review here

“It’s a brilliant bit of storytelling so will be of interest to a broad audience and will be of special interest to courses on post-colonial development in Africa and international business. Highly recommended .” Read the full review here

“This film presents an in-depth record of meetings on all sides, resulting in an eye-opening picture of the high-stakes battle over foreign investments and the exploitation of Africa’s natural resources.” Read the full review here

“‘Big Men’ takes us on an extraordinary voyage along the African oil frontier and provides an utterly unique look into the inner workings of the global oil and gas industry.  In placing the new oil scramble in Ghana alongside the explosive and turbulent history of oil production in its neighbor, Nigeria, the film shows how the “big men” – whether in Houston, New York, Accra or Port Harcourt – are part of the same rough and tumble universe of oil men desperately competing for the new oilfields, which bring wealth for some and misery for the majority.  A tour de force.”

~ Michael Watts, Professor, University of California, Berkeley
and author of The Curse of the Black Gold

“Rachel Boynton’s extraordinary ‘Big Men’ should come tagged with a warning: The side effects of global capitalism may include dizziness, nausea and seething outrage. Using razor-sharp journalistic skill to untangle the knotty saga of an American petroleum company’s entrance into the West African republic of Ghana, Boynton’s film also poses a series of troubling philosophical questions: Is unchecked greed an intrinsic part of the human character? Is ‘the greater good’ ever more than a convenient euphemism where big business and big government are concerned?”