“…devastating and topical…a gorgeously made and breathlessly moving piece of work.” Criterion Cast 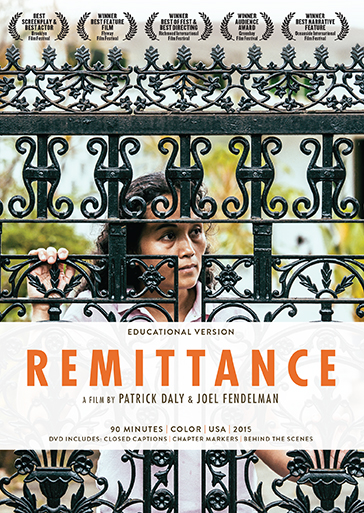 Filmmakers Patrick Daly and Joel Fendelman examine the global plight of migrant workers by telling the unhappy story of Marie (Angela Barotia), a Filipina wife and mother who leaves her husband, sons, and daughter for a job as a housekeeper to a well-to-do Singapore family so that she can send money home. Although not a documentary, the script is based on the experiences of Barotia and other non-professionals in the cast, and the directors stage the action—shot in Singapore and the Philippines—in a gritty style.  A realistic and timely film that carries the ring of truth, this is recommended. Video Librarian, Feb/March 2018
Read the full review

“Remittance provides an intimate look at the lives of migrant domestic workers in Singapore and captures the hardships that confront them in their struggle to financially get ahead as well as the perseverance of their sacrifice to support their families. Not unlike other domestic workers, Marie leaves behind her children and unemployed husband for Singapore in hopes of earning sufficient savings to eventually open a business in the Philippines. Yet, one hurdle after another confronts her including the deduction of eight months of her wages to cover the entire cost of her migration to Singapore and the squandering of her earnings by a womanizing husband. Yet, Marie perseveres, moonlighting at a bar in the evenings, acquiring skills in weekend classes at the local church, and taking business management courses for domestic workers. But does she eventually prevail?  Remittance should be viewed by anyone interested in the plight of migrant women workers. It is a must-see for students of labor, migration, and economic globalization.  Rhacel Salazar Parreñas, Professor, University of Southern California, Author of “Servants of Globalization: Migration and Domestic Work”

“Remittance is a quiet, unpretentious feature film that manages to relay the lived experience of being an overseas Filipino worker (OFWs) in a sober yet sympathetic light. Without narration, the film portrays in vignettes the quotidian complexities faced by migrant laborer’s as it follows the main character Marie’s plight as a domestic worker in Singapore. Along the way, we catch glimpses of the lives of other migrant laborer’s, including non-Filipinos, and the variety of circumstances and choices they may face.

As an accompaniment to coursework related to labor migration, Remittance is on point as it humanizes migrant laborer’s and makes the experience “real” in a way that academic readings and lectures cannot. Especially notable is the choice of the filmmakers to cast actual migrant workers in lead roles, including the central character of Marie. Having migrant domestic workers dramatize their own experience gives this film a documentary feel and a level of ‘street credibility’ that resonates deeply with students.”  Oona Paredes, Assistant Professor, University of Singapore

“What a moving, tremendous achievement! One can study examples of global labor migration and exploitation in the classroom, but a screening of Remittance adds a deeply human, intensely intimate dimension to these portraits. The film’s raw immediacy and its perceptive, multi-layered exploration of the lives of Filipina domestic workers in Singapore tells stories that expose the lived experiences at the heart of crushing global inequalities.

As a film, Remittance immerses us in the joys and hopes of the characters at the same time that it attends to their insurmountable setbacks, anxieties, and frustrations. It is breathtakingly well shot and acted, and what is left unspoken is both complex and clearly expressed through the characters’ facial expressions and interactions. A must-see for anyone interested Southeast Asia, global labor migrations, or contemporary political economy.
Karen Miller, Professor ,Social Science Department, LaGuardia Community College, Deputy Executive Officer, MALS Program, CUNY Graduate Center