Civil War (or, Who Do We Think We Are)

Civil War (or, Who Do We Think We Are)

Civil War
(or, Who Do We Think We Are)

Urgent and nuanced, Civil War (or, Who Do We Think We Are) travels across the United States, exploring how Americans tell the story of their Civil War. Filmed from the last year of Obama’s presidency through the present, it interweaves insightful scenes and touching interviews filmed North and South, painting a uniquely crafted, multi-faceted portrait of the American psyche and the deep roots of its turbulent times. With delicacy and strength, subtlety and determination, Civil War portrays a nation in denial, haunted by an embittered past and the stories it refuses to tell.

“Rachel Boynton is masterful in her questioning and range of interviews for The Civil War (or Who Do We Think We Are). I think a film like this is best suited for the classroom because it will compel educators and students to think deeply and critically at the ways American History has been presented to us. It is all at once hopeful, maddening, and honest. It should be on every American History syllabus.” Kellie Carter Jackson,  Associate Professor of Africana Studies

“Civil War (or, Who Do We Think We Are)” brought me to tears again and again. What a heart-breaking portrayal of a divided nation that, finally, may be reckoning with the legacy of slavery. Rachel’s interviews contain moments so tender and intimate that they feel like revelations. She fearlessly asks questions not only of her subjects but of herself. “Civil War (or, Who Do We Think We Are)” is a layered, nuanced, structurally original work, and as a new Civil Rights movement at long last gathers momentum, the film’s call for empathy and self-examination could not be more urgent.”
Joshua Oppenheimer, director of The Act of Killing and The Look of Silence

“In this time of reckoning in the country, Rachel Boynton’s journey into the heart of Civil War memory reveals just how contested, and personal, the meaning of this defining event in our history remains. From flags and monuments in the town square to family photos and forlorn cemeteries, we, the living, continue to grapple with how to confront this singular event of national trauma and the horrific slave system at its deepest confounding root. Especially poignant are the interviews and scenes within our schools, where teachers and students struggle to make sense of the hold that the Civil War has on us still. How can any of us wrap our minds around the ugliness of slavery, or the deaths of 750,000 Americans over its demise, or the tragically short-lived liberation of close to 4 million enslaved black Americans, who, in the aftermath, would step out as the vanguard of our boldest experiment in multiracial democracy, only to see Reconstruction–and so many of the hopes it ignited—violently overthrown by a counter-revolution that ushered in a century of Jim Crow and altered the story of the war, and its most important cause, for generations and generations to come. It is our duty to challenge each other, as this film does, to search for the truth, to heal, and to imagine a better, and more just, future for all.
Henry Louis Gates, Jr., Executive Producer, American literary critic, teacher, historian, filmmaker and public intellectual

HOME VIDEO
Buy DVD $24.99
For teachers and home use only

Teachers’ Guide
Schedule a Screening and Host a Filmmaker Q&A 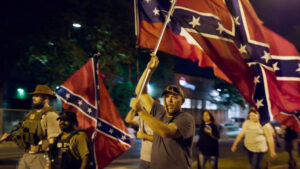 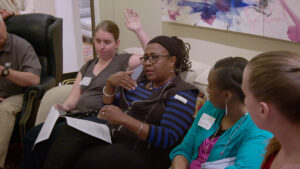 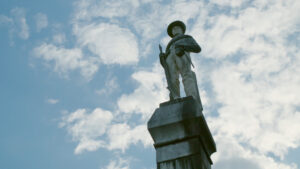 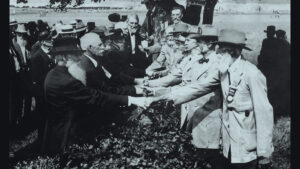